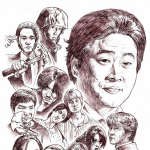 Thanks for noticing. I'm just writing this stuff fun. I think a lot of stuff I've done could use more cleaning up.

Yeah those are unreleased skits are from Version 3. You should probably not write about them until everyone gets their copy of the DVD.

How I edit Edit

I think we should clearly mark where Version 3 spoilers are on the wiki. I could probably make a template or something for this. Then we could remove the spoiler warnings after a month or so when everyone's had a chance to see every episode and all of the other materials.

I've made a template and put a message on the front page. Edit

I think I've nailed down the exact way the credits should look on the episode pages. I tried to put an exact copy of what appeared at the end of the episode at the bottom of the page, with just the bare minimum information at the upper right in an infobox. Check out Life Inside a Console for what I'm talking about.

What do you think about this? I'm still not sure what the infobox should be like but I think it's close to what it should be.

I don't think it's ever appeared written, only spoken, so I can't find any official spelling. I'm sure Rocco would know if you don't consider that cheating.

Why are you editing the page I edit it? Edit

You didn't edit every page. I did, I edit it for everyone. But you, you're just waiting for someone to edit the page and you edit it.

I accept you're apology man.

Sorry about that Edit

Hehe, sorry about the message I left for you. I forgot that you are admin ^__^. I didn't know that theres a category in the editing page. Thanks for reminding me.

Hey, Blackout0189. I made a new Wiki and how did you put the special page of New Photos? When I click the New pictures in the sidebar and it transfers you to special page New Photos, how did you that? And where should I put #topusers#, #visited#, #voted#, #popular and #newlychanged#? When I check the popular page and look at Most visited and I didn't saw #visited#. Please reply. And the wiki is http://gakinotukai.wikia.com.

The sidebar and Invalid Wiki? Edit

Ok, heres the page that I saw from Community Central that I'm talking about the #topuser# etc.

To customize the main navigation sidebar (just below the search box), click on the Edit this menu text, which will bring you to the MediaWiki:Monaco-sidebar page. You will be able to edit the text here, which will then modify the sidebar.

—The preceding unsigned comment was added by TheAC29 (talk • contribs) .

In addition, we've added a few "magic words" that you can use in the main navigation, and allow for specific information to be pulled in. The new magic words are as follows:

What country I'm in? Edit

I'm in the Philippines and I will be in Canada next year. Ok, I'll will not boldface the entire Transcript just the names and the wiki I made was from Japan and in youtube there are some Gaki No Tsukai videos there. So that's why I made this wiki for someone that is new to Gaki No Tsukai.

Just give me a sample from your sidebar. —The preceding unsigned comment was added by TheAC29 (talk • contribs) .

The sidebar is done Edit

Ok, the sidebar is done thanks for the sample you left for me. —The preceding unsigned comment was added by TheAC29 (talk • contribs) .

Sorry, the invalid wiki has a wrong spelling Edit

The link I typed it's spelling is wrong. That's why it saids invalid wiki it should be like this http://gakinotsukai.wikia.com.

About editing the skit Super Mario Galaxy 2 for Dummies Edit

Hey I was just asking, did you disable the rich text editing because it contains complex code? Because I was going to edit that skit and it didn't automatically give you the normal edit instead it was using in Source mode.

Not going to be in this wikia Edit

Blackout0189 I'm may not going to be in this wiki, I need to help out some problems in my wiki.

Thanks for the welcome, Blackout. I'm looking forward to contributing to this Wikia regularly, and maybe even finding time to join a group of regulars. —The preceding unsigned comment was added by DerWinterMond (talk • contribs) .

Question about font colours and formatting of Picture Needed and Stub alerts. Edit

Hey there Blackout, I was just wondering if it would be relevent to talk about the colouring schemes of the notices for Picture Needed and Stub, among others. I can attest to having 20/20 vision, but however, I do notice that I really need to squint in order to see the majority of the notices, due to the grey text. Might I suggest a subtle change to black? This would make a constructive edit of the text so that is not only more legible, but also easier to abide by. I mean, is a hexadecimal value change of 464646 to 000000 really going to change much? I wouldn't say so. Well, either way, I was curious, and the best way to purge curiosity in this case was to ask. Get back to me when you can, thanks for maintaining a great wiki. DerWinterMond 07:42, October 8, 2010 (UTC)

Hmmm...seems to be working alright with the colour issue due to Monoco carbon. Edit

I get it now, I think. Edit

Ah...so content didn't refer to in show or Mega64 based content, then? Okay. I was confused at why it wouldn't apply, but thanks for the heads up.

Don't forget to put some videos for skits, just get the videos from youtube.

Can I actually use any tools? I've been attempting to access and add additional quick access tools in the "My Tools" column, but to no avail. I figured since I was listed under featured users, that I might have the ability to use the tools which are not marked admin only, but this does not seem to be the case. I'm actually rather confused about it. Please get back to me when you can, thanks. Having the ability to utilize such tools will increase both the rate at which I make/edit pages, and the quality that they turn out at.

Yes, I can do that. I'll upload a new logo as soon as I figure it out.

Uploaded a new wiki logo. I think it looks good.

Is GS4302-Dad good at making wordmark? Can you tell him to make Ghost Adventures wordmark for my other wiki and tell him to leave a message for me.

To make the logo I used a copy of Paint Shop Pro 7 that I've had for ages. There's probably better programs but I wouldn't know about that.

I just contacted Wikia about the problem, but it's not the browser that I'm using maybe is the bug.

Thanks! Yeah, I've always wanted to contribute to this wiki. Now that I've got a lot of time on my hands, I think my boredom will be a great motivational tool to add more to a lot of the pages that have barely anything in them. Which, if I might ask, how do you add the picture on the top right that's basically the profile pic to a page? I just added a picture to John Wanser's page, but that's not exactly it. —The preceding unsigned comment was added by Zombiefriend (talk • contribs) .

Oh, okay. Thanks. I'll be fixing some of those up then. I also had a question about the main guys that have their bio's copied from Mega64.com. I was thinking of taking those down and adding other stuff, because there's already an external link to those pages. Are you cool with that, or would you rather leave it as it is?

Good job on this wiki

Though you might already know about, I thought I’d remind you about [Special:LicensedVideoSwap|Wikia’s Video Swap tool], which allows you to very easily swap out YouTube videos embedded across your community for the Wikia equivalent. It only effects YouTube videos with a matching Wikia video. Swapping out your videos for matching officially licensed Wikia videos means that the videos on your community are less likely to be taken down and rendered unwatchable.

With your approval, I can go through and make these swaps for you — if you’d rather undertake this task yourself — or if you’re uninterested entirely — just let me know! I'll likely start making some of the swaps for you in a week, so be sure to let me know as soon as you can if you'd rather not make the switch."

Retrieved from "https://mega64.fandom.com/wiki/User_talk:Blackout0189?oldid=9894"
Community content is available under CC-BY-SA unless otherwise noted.